Pickleball as a sport has some unique rules of service that can seem quite complex to wrap your head around at first.

However, because they are so fundamental to the gameplay of pickleball, the service rules become second nature once beginners get used to the game.

While some of the rules can seem confusing at first, they begin to make sense with time, and we’ll cover them here.

How Do You Determine Who Is Serving In Pickleball?

The first serve is typically determined by an equal-chance method like a coin toss to set the game off.

The winner of the coin toss can choose whether they would like to start the game as the server or the receiver.

Beyond this, things start to get a little more complicated, and the rules vary depending on whether you are playing singles or doubles.

Pickleball uses a scoring system called side-out scoring (see also ‘What Is A Sideout?‘), and the rules for singles matches mean that only the serving side can score points.

While the receiving side focuses on getting the server to fault so that the serve will alternate with them.

In doubles matches, the same rules apply as in singles matches, except that they are adjusted to accommodate an additional player on each side.

Server 1 will go first, and when they fault, the serve will be transferred to server 2.

This is to make the game fairer from the start. Once the first serve has been passed on, the second servers can have their turns.

In both singles and doubles, the serve will always begin on the right hand side.

How Do You Determine Whether To Serve From The Left Or Right?

A key component of the serving system within pickleball is the alternating sides from which the players will serve.

In singles pickleball, the serves are determined by the server’s score. If the score is an even number (0, 2, 4…), the ball will be served cross-court from the right side of the court to the left, or the opponent’s right.

If the score is an odd number (1, 3, 5…), the ball is served from the left-hand side of the court cross-court to the opponent’s left. The receiver will move to be diagonal from whichever position the server is in.

In doubles pickleball, there are two players on each side of the court who take turns serving before it is passed on to the opponent.

Server 1 starts the game off on the right-hand side of the court, and when a point is scored, they switch places with server 2 to alternate from right to left and then left to right.

Server 1 and 2 must remain on their side of the court unless they score a point, and the receiving team does not alternate sides.

The first server of a game should always be on the side of the court that corresponds to the team’s score – so right, even, and left, odd.

How Do You Serve Correctly In Pickleball? 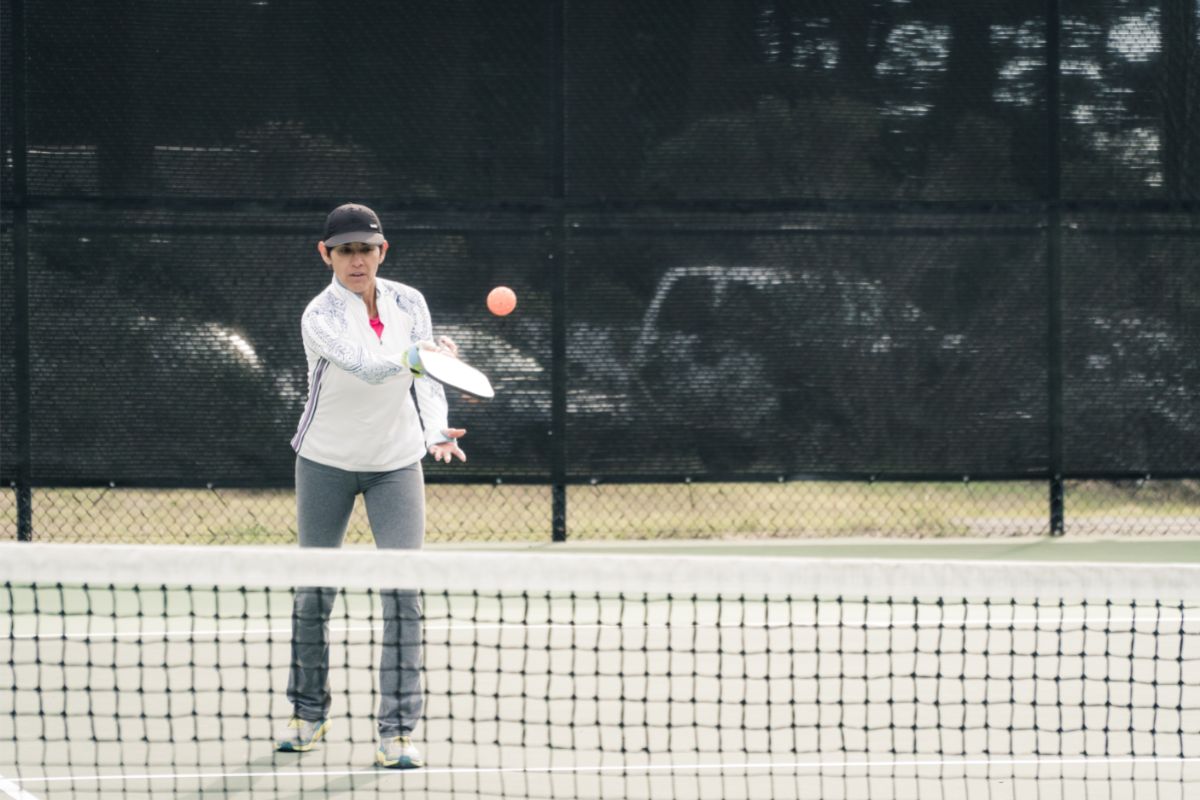 There are some rules on how to serve the ball correctly in pickleball, and any mistakes are classed as committing a fault.

The position of the player and their paddle during a serve is very important.

The server must serve from behind the baseline and from the side of the court that corresponds to the server’s score, and the ball must be hit diagonally into the opponent’s service court.

The ball must be hit deep and central into the opponent’s service court to keep them at the back of the court. The server must remain behind the baseline until after the 3rd shot is hit.

The ball must be hit with an underhand stroke, which must be done below the waist, defined as the navel. The highest point of the paddle head should be below the wrist when it strikes the ball.

Pickleball rules were updated as recently as January 2021 and changed some rules on serving.

‘Lets serves’ are no longer allowed – this was when another serve attempt was allowed if the ball hit the net but landed in the opponent’s court.

There is now only one chance to serve correctly – if the ball hits any part of the net and fails to cross into the non-volley zone, it is considered a fault and the serve will be passed onto the next player.

It is considered a ‘live ball’ if the ball hits the net and lands beyond the non-volley zone.

The other change is that ‘drop serves’ are now allowed. This is where the server can drop the ball and hit it after it has bounced.

The ball may be dropped from any height, but it cannot be released in such a way that it adds any additional force to the bounce, such as by throwing it.

A key thing to remember is that the ball must have bounced once on either side of the court after each serve before players are allowed to begin volleying the ball.

While the rules of pickleball can be pretty intimidating at first, it is the complex nature of the service rules that give the game its charm.

Once they get used to the uniqueness of pickleball, many people grow to love the challenge.

Once you develop your understanding of what side you should be serving from each time it’s your turn, it becomes much easier to understand the gameplay and enjoy it.

Remembering to switch from right to left and left to right is a key component of the game, and it will help you develop your skill as you will get to play from both sides of the court.

Pickleball In The News

Originally Published on March 11, 2021 by Staff 1. Pickleball- the Fastest Growing Sport in the USA Though originated in 1965, the game of pickleball did not get much popularity until the recent years. It is one of the fastest growing sports in the country as people...

END_OF_DOCUMENT_TOKEN_TO_BE_REPLACED

In my physical therapy clinic I use pickleball drills and training to help patients with Parkinson's disease all the time. Parkinson's disease is a progressive, neurodegenerative disease that affets movement. Patients will present with different symptoms from rigidity...

END_OF_DOCUMENT_TOKEN_TO_BE_REPLACED

How to Avoid Falling in Pickleball

The reality is, that people will fall. Fall prevention is kind of a silly concept to me. I try to focus more on being able to fall without getting hurt. Yes, we want pickleball players to improve their balance and coordination, but falls will happen and the goal of...